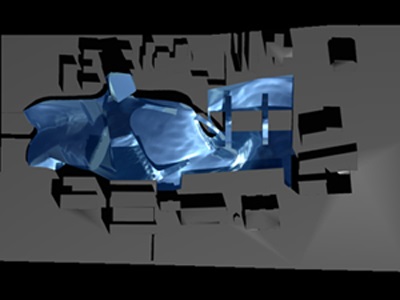 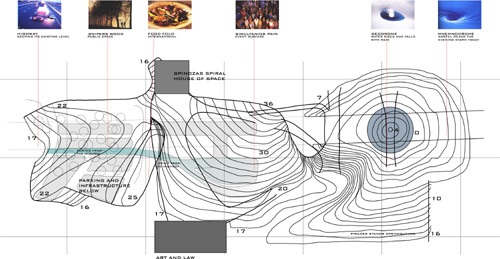 This document outlines the competition organized in conjunction with the RAIC Architecture Festival which was held in Montreal from June 19 to June 21 1997. This was a open design competition of ideas, in one phase, which follows the competition guidelines of the Quebec Order of Architects (OAQ). This competition has highlighted the great potential of the chosen site Connecting Landscape The project tries to create a new topology on this neuralgic place in Montreal. It links all te seperate pieces of the town which touch each other on this site. The floating surface connects Old Town with the new City, English with French, and the city on the surface with the underground city. The liquid spacial configuration allows all the infrasructure and the traffic to flow through, without seperating them from each other. If allows you to change your mind of what you were just up to do, by giving you the chance to stay , hide or eat. The landscape ist zoned in different possibility spaces: 1: Snipers Wood: This is a very dense maple tree wood between the conference center and St Laurent Boulevard. It is a provocative discussion over public space. Public space is only there where it is possible to shoot someone. If the upper Class and the Goverments beginn to skip the risk of being exposed to the streets, and hide behind walls and „Private Property" sighns, Democracy is on the way down. And especially Architects have a big responsibility for building fortresses of money and power. On private easy controllable streets nothing can happen like it did in Paris 1789. 2: „Simultanous Pain" Here varios events can take place, from a market to party the space can taken over by people. Simultanious unplanned events create public spaces unlike organised events. But te surface ist steep on some places, so people always have to recognise where they are feel their bodies. 3: Geodrome This is a tribute tu F. Werfels travel in the (near?) future. The space flows through under the Highway and connects the Metrostation Champ de Mars with the open space . Incoming and outgoing cardrivers , the Metro and the People are moving on one surface. The hole under teh Highway fills whith water from the rain. The water level rises and falls with the weather, and of course it freezes in winter and allows iceskating. The quite zone of water under the most moving space ourtimes (Highway). 4. Theatrum memori The highest part of the new landscape is dedicated to the artists. The adjacient House can be used as a stage for the auditorium -like formend piece of the surface.It should also be used to everythig what comes to mind of creative people. 5. Spinozas Spiral House This is a place to remember but also breake trough in the future. The Champ de Mars stays as a platform for Piranesians but will be undermined by the proposed topologie. It will also be penetrated to let light trough the sructures of power. Along the St Laurent Blv. the Surface is compressed to a „Food-Fold". In there the eating ceremony brings together various people having all the variety of the ethic dishes of the different people in Montreal. This project believes in Aristoteles when he says that only different people can create a City, but we belive they need a „Connecting Landscape" jury comments: The urban cynicism of this proposal was greatly appreciated among the jury. Ironically, it is proposed to blur the existing dualities as well as the threshold to permit one to change is mind on what he was about to do. Multiplication of circulation " gadgets " are introduced to accentuate vertical and horizontal connections. A " sniper's wood " is then used to cover the newly defined topography. Far from being dismayed by the " alien nature " of the project, the jury appreciated the potential of the proposal to establish a strong autonomous entity between Faubourg Saint-Laurent and the Old Montreal as well as setting clear architectural principles to generate the form.