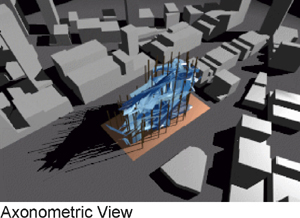 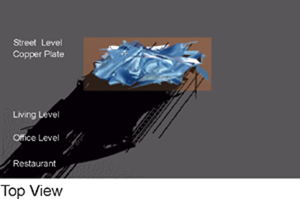 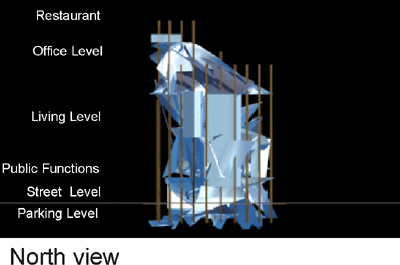 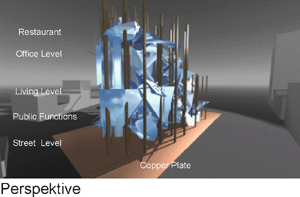 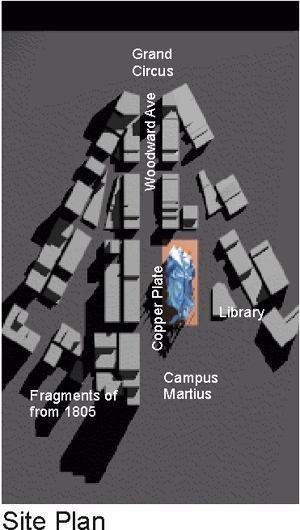 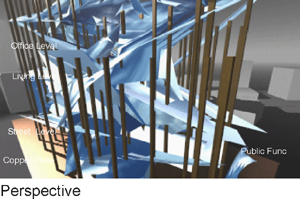 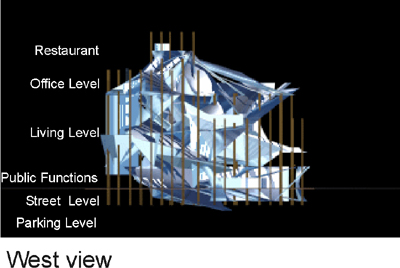 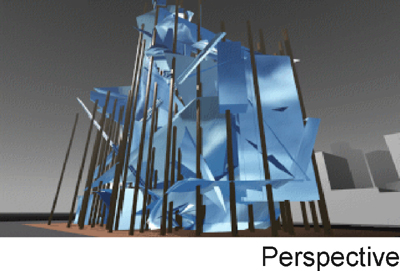 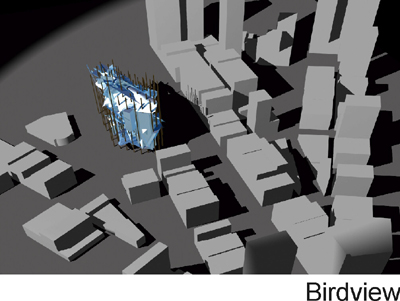 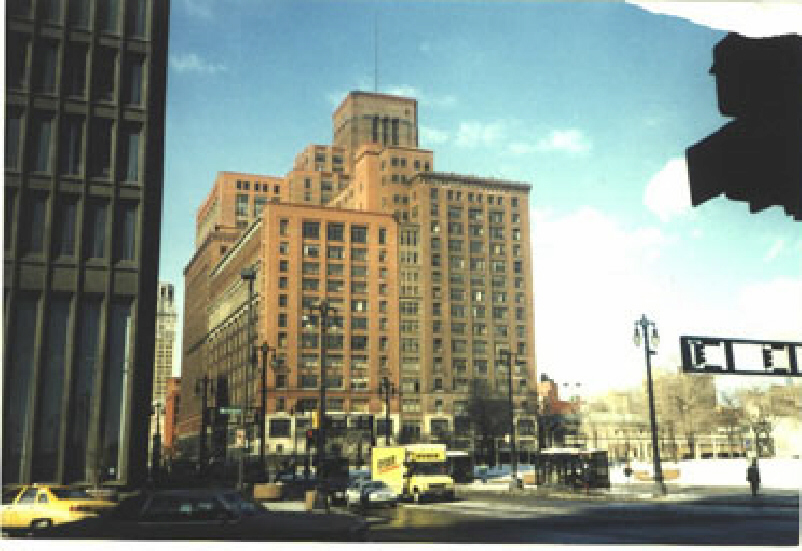 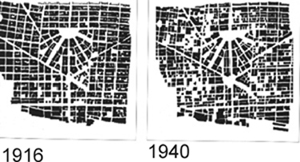 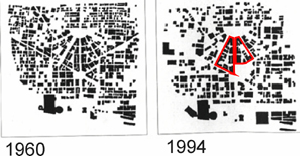 III. project. The old structure of the building is used to carry the new spatial layout of the >Fragments< found in the city. Trough a very complex mechanism of searching and finding, decoding, in- and formation, a matrix of a spatial form is generated by human (author) and machine (computer). 126 fragments were used as basic information. These fragments the author found in Detroit of 1996 and on old maps and photographs were used to construct the history , the actual situation of the city and the vision for the future. The information supplied by the fragments was decoded into a basic language With the help of a computer the 3 dimensional forms were generated, inside of the Hudson's. material. The structure is made of metal sheets. Through a foldingstructure in their core they support themselves with the help of the steel columns of the Hudson's.The technology which is used to construct the metal sheets is the same as it is used to build a car body.The technical know-how of the big car companies of building complex 3 dimensional metal sheets can be used. The big car companies built up the city from the beginning, and Ford used always the newest technology to build his cars. In this traditions this project uses computertechnologie not only for design but also for the construction of the building. function. Investors or private persons can buy or rent a specified area within the matrix. This area can be used as anything the user wants. The sheet structure can be used as the rudiments of the different functions. Technical infrastructure is supplied along the columns. Stairs and elevators are supplied as necessary.The only restriction of using the matrix are the zones: Public Functions Living Levels Office Levels This is necessary to keep this building open to the public. This project developes a new typology for a new way of inhabiting a city at the beginning of a new century, like Albert Kahn created new types of Building for a new way of production at the beginnig of the last century.The new structure is a matrix of probabilities.The relation between the virtual possible and the realised probability is not predeterminded by the building, but by the flow of time and needs. Everything what happens must deal with the given geometriy and so with the city. Anything can establish on the surface of a geometry which was generated by the history of Detroit. One can tell how much of the Building is in use. Even if the building is empty it still has the possibility to develop and to react on new conditions. So the flexibility is much higher than the one of a common office building. An eventsurfaces such as this is tho only system which could really work in a city like Detroit. A selforganising system embedded in the history of a place once called the hub of America. This time the big Motorcompanies can make a contructive contribution to a decontructed city which earns no nostalgic renaissance, but a new way of thinking and living in a city. ----------------------------- I.site. The city of Detroit is an example of a city with a devasteted center. Once Detroit was known as >Dynamic Detroit< . This dynamic has shifted from Downtown to the metropolitan area. In the monotonous pattern of family housing no center can be located. Only big malls and cinemas are somewhere in this wide area. The former center of the city has become a territory of fear. This fear is almost a collective fear, which is more based on stories people tell, than real crime. The streets are a symbol of danger where you are not protected from violence. The city map of Detroit is a result of different visions in different times (Woodward to Porter). The last important interference in the city was the building of the peole´s mover and the big renaissance center which helped to keep people away from the streets. The city has been fragmented. This project tries to filter out the information of the fragments and create a new reality. A constructive project. II. Hudson´s. In the middle of the center the Hudson's is a very important landmark. Older People still recall the Hudson's as the symbol for downtown and public space.A complex system as a city can only be manipulated by changing a little spot at the right place. Like a chemical element can change radically if you just put a different molecule on the right place. This point in the city of Detroit is the Hudson's, and not only the site of the building but the building itself.